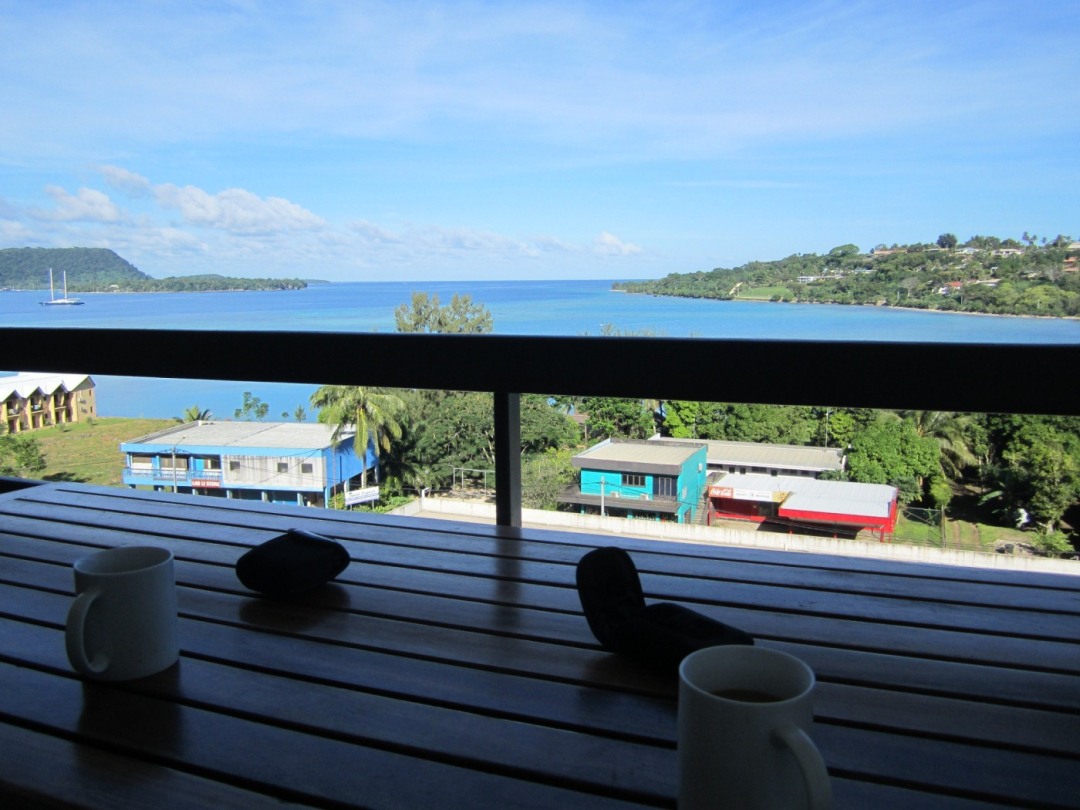 So it’s been a while.  Despite my conviction that I’d blog every day, 2 weeks have passed and there now seems to be so much to talk about I don’t really know where to start…

I guess the beginning was was a midnight horror flight PER-BNE, a screaming baby (and when I say that, I can’t really emphasise it enough…), 12 kilos in excess baggage and the two of us feeling, well, pretty apprehensive.  My ears were ringing so I headed into the toilet to muffle the screams, but then something strange happened…the screaming stopped.  I came out to find a baby spread eagled in the aisle next to a pool of vomit while my poor husband – an innocent bystander who was sitting across the aisle – was now lightly coated in baby spew.

Despite this rocky start, things in Vanuatu are fantastic.  We’ve found a beautiful place to live 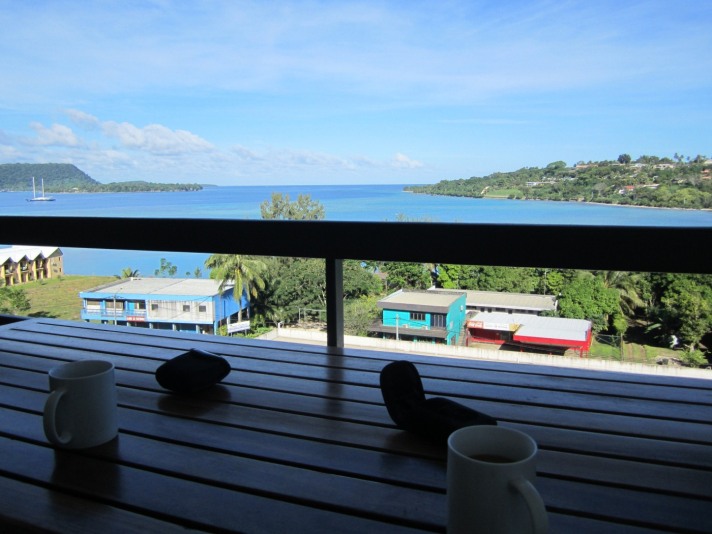 and we’ve started to find our feet.   It may sound silly but we’ve walked, and walked and walked around Port Vila just soaking it all up.

It’s the little things that are funny. Like adjusting to the colourful sea of women whose Mother Hubbard dresses bob up and down the main street.  Their rich reds, greens, fluoro pinks and yellows create a kaleidescope of colour as the women laugh and jostle along.  These dresses are a mainstay for young and old women alike, who proudly wear their gravity-defying puffed sleeves and clearly live by the rule, brighter is better. 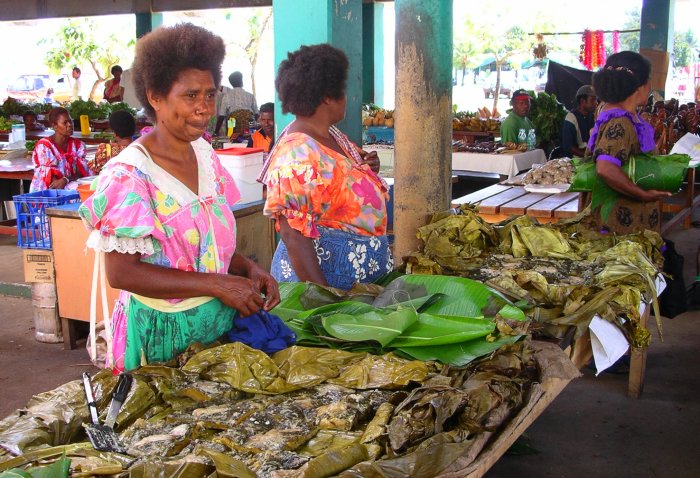 It’s other things too, like the french influence, that makes this place so intriguing.  Vanuatu was a French and British condominium and you see it everywhere you go.  The country is trilingual with Bislama, French and English the languages of choice.  While there is a strong community of Expat Australians and New Zealanders, there is an even stronger community of expat French who bring culinary delights that are hard to top.  Baguettes are order of the day at 55VT a pop (that’s around 60 cents a piece) and for those looking for a sugar hit (and yes, you know that’s me…) petit sucres or mini cakes are in abundance too.  The hot tip is to try the national dish, the Flying Fox, at a French restaurant.  Something about rich buttery sauces disguising even the most ghoulish of meals… 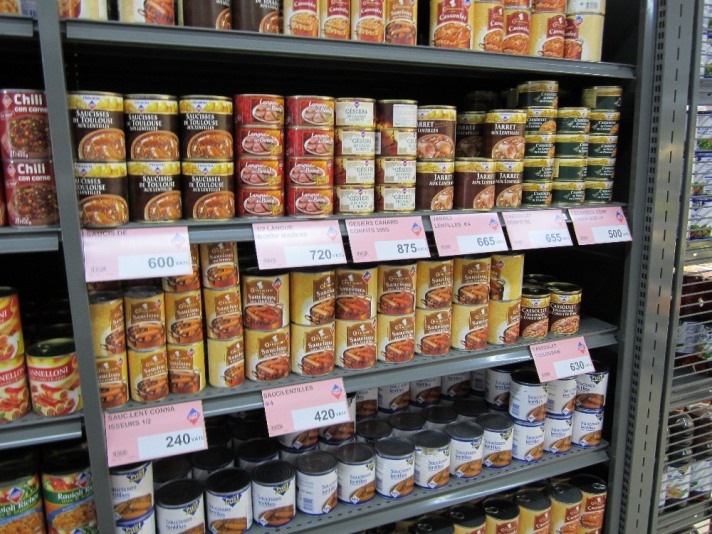 Saucisses anyone??  Where else would you find a wall of saucisses and cassoulet except a French supermarket ??

Food has been a funny one here.  Learning how to shop at the markets and, most importantly, discovering what foods look like before it is packaged. We spent the first week living on paw paw and passionfruit – the only foods that we could recognise.  After a little more investigation (and the assistance of Google images) we discovered a heap of new and not so new ingredients to cook with. 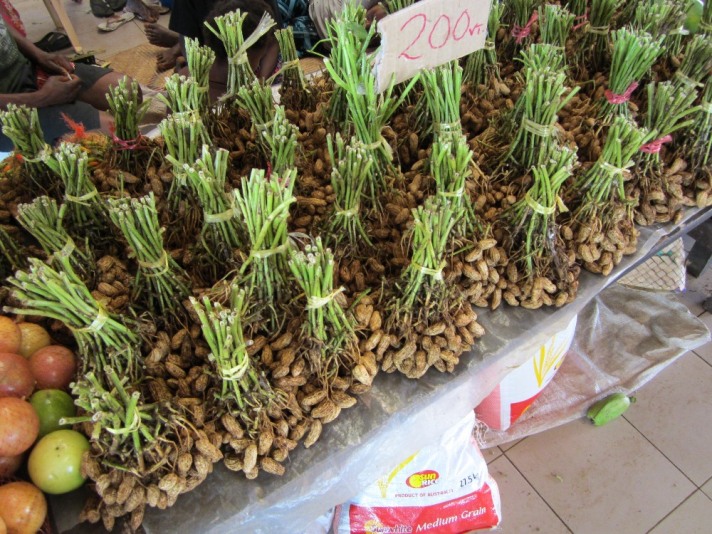 Peanuts in their raw form.  Who knew??!

There’s paw paw, coconuts, taro, sweet potato and what I’m pretty sure is zucchini, but I’m a little scared to try.  The citrus fruits are the really tricky ones because everything is green.  It turns out that’s normal in a tropical environment – they’re perfectly sweet and fresh, they just aren’t orange.

Each week women gather their fruit and vegetables, and travel to Port Vila where they sell them at the markets in town.  It’s an incredible sight – children dart around while women sit together and braid each other’s hair.

The thing that gets them really excited though, is our dodgey attempts at Bislama….”Yumi tok tok long bislama” as they begin with a crazy cackling laugh and we sheepishly wonder what, exactly, we managed to say!