Learning bislama has been an interesting experience: it excites and stupifies in equal amounts.  While initially I thought I had this pidgin language (English and French) in the bag, I’m beginning to realise that I am very far from holding a basic conversation without embarassing  and/or disgracing myself.

The thing I love and hate about bislama is its sheer functionality.  What is the word for piano you ask?  Try this:

Lyrical isn’t it?  The thing is there’s a whole new complexity when you have limited nouns, even fewer adjectives and virtually no tenses.  It means you really have to read people – something that can be really hard when you are from a different culture.

The other day we were travelling into town in one of the work cars.  I insisted on sitting in the back so that one of the boys could sit in the front (common rule in Australia: long legs equals front seat priority).  He looked blankly at me, said “I stret” then took the seat.  Later, a French friend said that I had to sit in the front seat on the way home.  He said I’d made the guy uncomfortable by sitting in the back.  You see people in Vanuatu hate conflict.  While “I stret” means it’s good or it’s fine and he had a blank look on his face, he didn’t give me an enthusiastic response.  That was my sign that he was in fact, very uncomfortable.

So, I guess all in all I am still a very long way from understanding both the language and the silent politics of this place.  But I’m trying.  Of all the lessons to date, I have learned a few that are helping alot:

1. When in doubt, just add blong.  It may sound silly, but in bislama it makes a world of sense.

2. Try. Then try again.  The more you try speaking bislama, the more people appreciate it.  They also normally pretend that what you said made perfect sense in bislama (although they were paying particular attention to your hand gestures at the time…)

3. When your husband refers to you as “woman blong mi” he isn’t being a jackass. That’s the official term.

5. Tone is infinitely important here.  Like this little pearler (below).  In Australia this would be a derogatory term, but in Vanuatu this is what it is.  A bikini top is quite simply a basket blong titi.  It’s hard to argue with really… 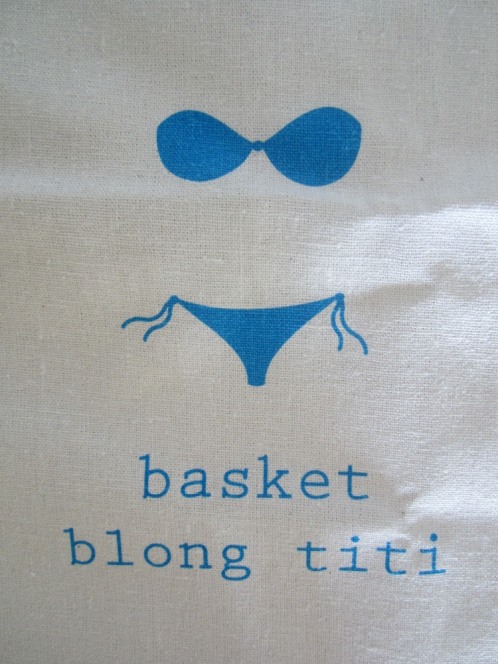